Probably, one thing about common law marriage Iowa residents already know is that the state recognizes it. Unmarried couples, therefore, have marital rights and obligations as those in regular marriages.

Yes. Iowa is one of the very few states that still recognize common law marriage. Marriage by common law is legal for all purposes, and couples may enjoy all the rights and obligations of marriage. However, the parties asserting the marriage have several requirements to fulfil for them to be considered common-law married.

Common law marriage is also known as informal or non-ceremonial marriage. It is a type of marriage that couples can enter into without getting a marriage certificate or having a wedding ceremony. Partners often think that they automatically become common-law married because they’ve been living together for a long time. That isn’t the case – in fact, a court will look at various factors to determine whether your common law marriage is valid.

Spouses don’t have to sign any document to become common-law married. Merely cohabiting or having children together doesn’t make spouses common-law married either. It is only by fulfilling the following requirements that spouses can be considered to be in an Iowa common law marriage:

– Present Agreement and Intent to Be Married

Despite the absence of a wedding ceremony or marriage license, both partners have to understand that their relationship is marital. Further, both have to agree that they are in that relationship and intend to be married.

A family attorney may even advise such couples to have a dated and signed statement stating their intention of getting married in Iowa. Such a statement can increase the probability that a court will validate the common law marriage.

Cohabiting partners have to live together, without interruption or a separation process. What’s more, they must have a romantic and sexual relationship while living together. The state doesn’t specify the time requirement for how long or how often couples have to cohabit. However, a rule of thumb is that they should live together for most of the time rather than periodically.

For a court to validate a common law marriage, there has to be a general and substantial declaration that couples are married spouses. They must hold themselves out to family and friends as husband and wife by behaving how any other married couple would. Some of the ways to fulfil this element include:

The basic marriage laws in Iowa apply to both formal and common law marriages. Generally, parties must have the capacity to enter into a marital contract. As such, parties intending to be married must also fulfill these requirements:

To establish the existence of common law marriage, the burden of proof is squarely on the party making the claim. The party must show all the essential elements of such a marriage by consistent and convincing evidence. Parties can demonstrate a common law marriage by circumstantial evidence. Continuous cohabitation and holding out to the public as married spouses create a reasonable presumption that a non-ceremonial marriage exists. 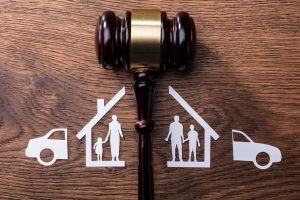 It’s true – common law marriage in Iowa has the same legal consequences as a ceremonial marriage. Common law spouses have the same rights and obligations as spouses in other legal marriages in the state. You can’t just end the relationship without following due process – the law requires you to file for divorce.

Basically, spouses will have rights to property, spousal support, child support, custody, and visitation, in line with Iowa’s marriage laws. Surviving spouses will also be entitled to marital property upon divorce.

Whether you’re in a ceremonial or common law marriage, you can only end your marriage through divorce. One of the commonest issues during divorce is the division of property. In Iowa, division of property has to be equitable – not necessarily equal but has to be fair. You can agree on how to divide property, seek the help of an attorney or mediator, or go to court if you can’t agree.

If you go to court for a judge’s decision, they will consider various relevant factors, including the following:

Iowa spouses in a common law marriage can divide property by assigning certain assets to each spouse. Where one spouse gets more of the property, they can make an equalizing payment to the other spouse. In some cases, spouses may decide to sell the property and divide the profits in an equitable manner.

Common-law spouses may also agree to continue owning property together. While this is undesirable for most divorcing parties, spouses can choose to keep investment property, hoping that its value will appreciate. Some couples may also agree to keep the family home until their children attain the age of majority.

Besides the assets, couples must also assign all the marital debt. This includes mortgages, auto loans, and credit card balances.

Even in a common law marriage, spouses have to first determine whether property is marital or separate before the division can take place. Separate property is that which a spouse owned before marriage or acquired during marriage as inheritance or gift, or after separation.

Spouses in common law marriage can also convert separate property into marital property. This is done by changing title to joint ownership. Spouses can also mix their separate property with marital property – often known as “commingling.” In some cases, commingling can be considered an act of publicly declaring that you’re married spouses in a common law marriage.

If two unmarried parties are cohabiting and share a common domestic life in Iowa, they may be considered to be in a domestic partnership. It is generally a legal or personal relationship between two parties who aren’t legally married in the conventional way.

The knowledge of domestic partnership Iowa residents have may be shallow. Most may not know the specific level of rights and obligations granted by a domestic partnership since laws vary from place to place. Domestic partnerships are common with unmarried traditional couples and same-sex couples. They help protect the contribution made by spouses during their relationship.

Legal issues concerning domestic partnerships may not always be clear. If you want to legalize your relationship, it is important that you speak to a family lawyer or seek legal aid from a legal professional.

Being in a common law marriage gives spouses marital rights. Yet, there are common beliefs about this type of marriage that aren’t true. Some of those myths include:

Spouses married by common law can’t end their union by merely having an agreement – what people would term “common law divorce.” Marriage by common law in Iowa makes couples legally married, and a dissolution decree is necessary if couples decide to end their marriage. If you wish to terminate your common-law marriage, you have to go through the conventional divorce process.

In this article, we’ve discussed the legality of common law marriage in Iowa and the marital rights accorded to common law spouses. Here are some of the main things to remember:

In short, couples in a common law marriage are considered legally married and have marital rights and responsibilities. Couples who live together but wish to remain unmarried may consider creating domestic partnership agreements instead.

How Much Is Adoption in Texas? Evaluating Adoption Costs

What Does Child Support Cover and What Exactly Is It?