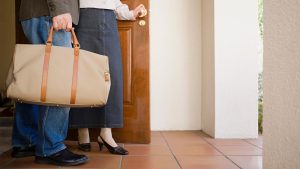 One of the spouses might have to leave the house in a divorce – a harrowing decision for most couples. The divorce laws in most states don’t outrightly state who gets to stay or leave the marital home during a divorce. It depends on your state’s separation laws and the potential personal and financial effects of moving out.

This article looks at all the factors that may be considered in deciding the party that leaves the house during a divorce.

Who Has To Leave The House In A Divorce?

There is no straightforward answer to this question. In some cases, one of the spouses will have to move out of the house. In others, a couple might have to co-live during their divorce as they await the judge’s final divorce decree.

Split-ups can be emotional and stressful for couples to handle, and having to find somewhere to live during a divorce could make things more difficult. Understandably, deciding who leaves the house is one of the most daunting things spouses have to do.

Depending on the relationship with your soon-to-be-ex, you can both come to an amicable resolution and figure out how to live during the divorce. If one of the spouses has to leave the house, the decision will majorly hinge on your state’s separation laws and your current financial situation.

– Whose Name Is on the Title?

Does that automatically give them the right to stay in the marital home during a divorce?

In such equitable distribution states, a spouse’s contribution to the mortgage gives them an interest in the home. If you bought the home before marriage and only your name is on the title, you might have a stronger case to stay in the house during a divorce.

When there is a lot at stake, divorces can easily result in flare-ups. If you acquired your home before marriage, you are less likely to give in and let your spouse stay in the house during the divorce. That is especially the case if their name is not on the title.

Some states require that divorcing spouses live “separate and apart” for some time before filing for a divorce or before the finalization of their divorce. In most cases, that could necessitate one party moving out during separation.

However, in some instances, couples can fulfill this requirement even when living under the same roof, especially if they no longer have marital relations.

If you live in a state that requires spouses to live separately and apart before filing for divorce or before the finalization of the divorce, you and your partner have to make the tough decision of who moves out.

Personal and Financial Aspects of Moving Out

There is no denying that both spouses have a personal connection with their family home – even the thought, let alone the act of moving out, is difficult. You have shared beautiful moments with your spouse in your home, and even greater ones if you have had children together while in that house.

In some cases, a spouse’s comfort and mental well-being comes into play. For some people, things can never be the same after their partner asks for a divorce. It’s even more difficult to live under the same roof if you are splitting up for infidelity reasons.

Even if you move out, you can still get the house after property division as judges in most states distribute property equitably or fairly. That would depend on various factors, including the length of the marriage, contributions of each spouse to the household, the health of each spouse, and even fault in the divorce.

The family home could also contain personal property, such as appliances, furniture, and other important items. If you’re going to move out of the house during the divorce, you must take inventory of such items.

If you are the homemaker and the financially dependent spouse, you may have concerns if you are the party to leave the house as you may not have the means to support yourself before the finalization of your divorce.

However, a judge will likely give temporary orders for alimony before finalizing the divorce. With such spousal support, you can meet the costs of living outside your family home.

The good news for homemakers is that a judge may be inclined to let you stay in the marital home during the divorce if you go to court for a decision.

Other Considerations of Who Stays in the Marital Home

You may be asking for a divorce due to persistent acts of violence by your spouse. If that is the case, you should take all the necessary measures to keep you and the children safe, even if it means leaving the family home. 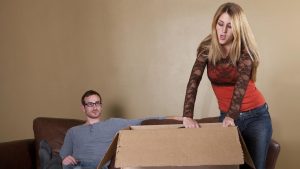 While there could be concerns about the wife moving out before divorce (especially if there are children in the marriage), safety should never be compromised.

A divorce lawyer could also help you get a protective order from the court if you are a victim of domestic violence.

This order will ask your spouse to move out of the house during the pendency of the divorce.

If you resort to this means, consider living outside the marital home while your protective order request is pending. That way, you can avoid any harm as your partner might be angered by your request.

It is not uncommon for one partner to hastily pack their bags and leave whenever an argument escalates. Such decisions often backfire, especially if it is the husband who leaves. Moving out early on and staying away from the wife could be labeled as abandonment, which could swing the tides against them in divorce proceedings.

If you move out during a separation, let it be known that it is purely voluntary and that you have no other intentions. Remember, you don’t have to leave unless a judge orders you to.

– Children in the Marriage

Dealing with a divorce while living under the same roof could brew a toxic environment, especially for the children. As such, it might be in the best interest of everyone to have one partner live outside the family home during the divorce.

Even if the children’s primary caregiver will likely be allowed to stay in the house during the divorce, they can also voluntarily choose to move out if they think it is the best thing.

Keep in mind that a couple’s decision regarding who stays in the family home will likely affect a judge’s decision on child custody and child support. In most cases, judges will maintain the status quo to avoid a repeated change of environment when children are involved.

If the children continue to live in the family home during a divorce, the parent living with them could argue that altering this arrangement after the finalization of the divorce will be disruptive.

However, the other parent could claim that it would be punitive, especially if they are not given custody of the children. To avoid this scenario, parents should come up with a parenting agreement that states that neither spouse has given up their custodial rights by moving out of the house.

If there is no agreement, the parent who volunteers to move out during divorce but wishes to spend more time with the children should request the court to come up with a shared parenting schedule. Accomplishing this early on makes it the new status quo.

Do I Have Options Other Than Moving Out?

Yes. Partners who can soberly handle their divorce-related matters may not have to make the grueling decision of who leaves or stays in the marital home.

So, are there any legal short-term options that can help solve the conundrum that is the occupation of the family home during a divorce?

Below, we evaluate the options:

For some divorcing parents, bird-nesting is the answer to having one parent move out of the house pending the finalization of the divorce. Bird-nesting refers to an arrangement where parents rotate living with their children in the family home while dwelling in separate residences.

A common way of nesting is having the children permanently in the marital home and the parents sharing and rotating an apartment. That ensures little disruption for the kids, which is the goal of nesting.

However, bird-nesting works best if done in the short term, say less than six months. If it goes on for longer, it might cause the children confusion and anxiety with the constant rotation of the parents.

Spouses who live in large enough homes can split the house into separate areas for each one to occupy. They can then share the common areas of the home or come up with a schedule to use them.

What Changes After the Divorce?

In other cases, parents might choose to co-live. This could mean making arrangements on how to share and rotate the family house to avoid a change of environment for the children.

The other option is to sell the family home and divide the proceeds. This would work best if there were no children in the marriage. Otherwise, it would make sense for at least one parent to continue living in the family home.

Both spouses can live through the pendency of their divorce with neither having to leave the family home if they can reasonably handle issues. However, things are set to change after the finalization of the divorce as far as the marital home goes.

– Resolving the Issue of the Family Home Occupation

Divorces are generally emotionally draining but differ among spouses. Some are characterized by bitterness and vengeance. In other cases, partners slowly drift away before deciding that a divorce is only right for them.

Such scenarios often lay the ground for an amicable divorce through which most issues can be resolved by the partners. If you and your partner have children together, both of you must make living arrangements during divorce.

With a living plan, none of the spouses may have to leave the family home, saving unnecessary financial obligations for the party that would have otherwise moved out. Most importantly, it would ensure the stability of the children. 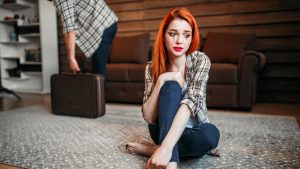 Below, we recap the main points of the discussion:

Neither of the spouses will likely go out of their way and voluntarily move out of the house during a divorce. However, the decision to leave may be fueled by a violent spouse or a court order. Depending on your situation, talking things through would help avoid an unfavorable decision imposed by a judge.

Waiting to Divorce Until Child Is 18: Evaluating Your Options

How Much Is a Divorce in Kansas? Breakdown of Divorce Cost Involved