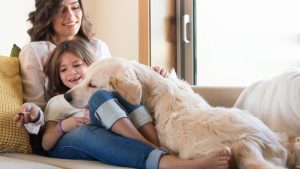 A dog in a divorce or any other pet is considered property by the court even though we value them as family members.

But unlike a house or a car, a dog is dear to us, and when the family ceases to exist, where does that leave the dog?

If you are contemplating getting a divorce, you probably want to go through this article to better understand the custody of pets in divorce.

Who Gets the Dog in A Divorce?

The person who brought the dog to the marriage is the one who will likely be awarded the pet in a divorce. Ideally, the custody of dogs in divorce is usually awarded to one spouse, although now we find judges awarding shared custody of pets.

Although it’s not something anyone likes to think about, this question often arises when two people decide to divorce. Marital property disputes in a divorce are normal. Divorcing couples fight over who gets the house, car, retirement benefits, artwork, etc.

But what happens when a pet is involved?

A good example is the Bennett v. Bennett family law case of the 1990s, whereby the divorcing couple couldn’t agree on who would get the dog and kept filing motions in court to adjust their custody and visitation rights. Due to the infinite child custody case files already in the appellate court, the judge disallowed court trials subject to pets to child custody-like decisions. For this reason, dogs are considered property in court.

Spouses are first given room to agree on equitable distribution of property, dogs included. If they fail to agree, they will have the judge decide for them. First, the court determines whether the dog is marital or separate property. The judge will ask whether the pet was owned by one of the parties before marriage. However, this does not mean that a pet cannot become marital property.

Though pet visitation is relatively rare, in some scenarios, the judge may award the visitation of a dog to one of the parties after the divorce. This means that one partner gets ownership while the other is allowed to visit at certain times. The amount of time and resources a court will give to pet visitation rights depends on the judge and jurisdiction.

Factors That Determine Who Gets the Dog in a Divorce 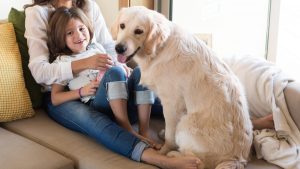 One consideration the court uses in determining the pet custody in divorce is who has custody of any children of the marriage. Although courts view pets as marital property, they are also concerned with the best interest of the child and may use that to determine that the dog stays with the children.

In cases of domestic violence, dog custody laws allow the court to award you temporary care for the dog. Even if your spouse technically owns the dog, you may be awarded temporary custody if the animal’s safety is at risk.

You may also be awarded ownership if the judge believes that the abusive partner may use the dog to continue hurting you during the physical separation period. It’s important to note that “pet custody” is not an official court term. Legally, it’s referred to as “pet animal ownership.”

Other variables a court may look at include:

– Best Interest of The Pets

Because pets are becoming a big part of our lives, some courts are beginning to treat pets more like children and less like property. Thus, there’s an emerging trend whereby judges take “the best interests of the pet” into account when deciding who gets custody.

The best interest of the pet is beneficial when both partners are adamant about maintaining ownership. You will be required to produce vet bills, work and home schedules, and witnesses to testify who is closer to the dog. The judge will carefully consider all these factors before deciding on the best interests of the pet.

Some courts have awarded shared custody of dog and alimony payments to the pet owners. However, this is still a new field and mainly depends on the creative arguments of the parties and the open-mindedness of judges.

– What Are the Other Options for Settling Ownership of Pets?

You can consider out-of-court options like mediation, given the risk of having a court decide who gets the dog in the divorce. In mediation, a neutral third party helps the divorcing couple resolve their issues, including fair distribution of marital property. They will not decide who gets what but instead initiates negotiations for a mutual agreement.

Creating a dog custody agreement gives you control beyond what the law or the judge says. You can decide who should be the primary custodian, visitation schedules, and expenses for vet visits, food, toys, and litter.

The pros of mediation include reduced costs, confidentiality, convenience, faster outcome, and preservation of relationships. Regardless of the mediation path, it’s wise to have a compassionate and experienced divorce lawyer to help you decide on the best approach for your unique situation.

– What Are the Risks of Court Decisions Concerning Pet Ownership?

One major limitation you might face is that a judge may not fully understand your bond with the dog. They may think your fur baby is cute but still view the dog as personal property, no better or worse than a house or furniture.

Many courts face time constraints owing to the numerous divorce cases awaiting trial. Also, besides the dog, you have numerous other properties that require division. All these factors give judges a limited amount of time to decide on the division of marital property, and so you’re going to need to convince the court why you are the best fit to have the pet.

Yes. While they may not have the mental capacity to understand all that is happening, they may develop separation anxiety whenever their routine is altered. This separation anxiety may manifest through excessive barking, clinginess, aggression, or lethargy.

Dogs form strong attachments to family members. During and after divorce, your pet dog can be a source of comfort to you, but a divorce can be a challenging transition for them as well. A professional dog trainer can help provide insight into assisting your pet during the transition of a divorce.

– Can You Separate Dogs That Live Together?

Yes, but if your pets have lived together for a long time, they have likely formed a close bond, and that should be considered. If you take one pet and your former spouse the other when you divorce, you could potentially be separating two close buddies.

With love, patience, and attention, you can help make the separation less traumatic for the pets as they adjust to the new life away from each other. You can also set up dog play dates so that they enjoy each other’s company as friends. If the couple doesn’t want to separate dogs that live together, they can decide which partner is best equipped to care for multiple dogs. 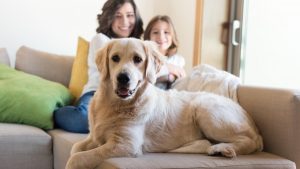 Divorce is hard enough on its own. This is especially true when property division comes with an intense emotional connection in the form of a pet. It’s crucial to know the current laws surrounding ownership of the pet, and lucky for you this article does just that. Here’s a summary of everything about who gets the dog in a divorce:

Routines may change during a divorce. Stress and anxiety levels may rise for everyone, including the dog. It’s beneficial to consider how divorce impacts your family pets and makes the transition smooth.

How Many Times Can You Get Married in Your Lifetime?