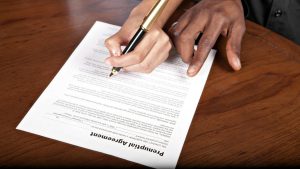 Prenuptial agreement Maryland is also called a premarital agreement is a written settlement between future spouses.

These laws specify how certain issues, like property distribution and alimony, will be resolved in the event of a divorce.

The contract is essentially an exchange of financial terms in exchange for the act of marriage, keep on reading to understand further.

What Is a Prenuptial Agreement?

A prenuptial agreement, also known as a prenup, is a settlement formed before marriage between two people that spells out what would happen if the marriage ends in divorce or death.

What Is a Prenuptial Agreement in Maryland?

Prenuptial agreement in Maryland is an agreement governed by contractual law rather than Maryland law. Writing a prenup is important because writing a prenup marriage is a lifelong commitment that does not always work out. Thus, a contract before marriage addresses the real risk of divorce by laying the groundwork for a new financial basis.

Fairness is ensured by having an attorney analyze the prenuptial agreement before signing. The state of Maryland considers this as a contract that is outrageously unjust can be challenged in court, and the agreement may be declared null and void.

What Are the Laws Regarding a Prenuptial Agreement in Maryland?

Prenuptial agreements are governed by particular regulations in Maryland specifying what they are, which is spell out how issues like alimony and property distribution would be handled in the event of a divorce.

In Maryland, this agreement may help you secure a family business or a family heirloom, among other things. Yes, a prenuptial agreement can be challenged in Maryland court for fraud, duress, coercion, error, undue influence, incompetence, or unconscionability. However, these agreements are intended to eliminate disputes and avoid any potentially contentious situations.

– Considerations Should Be Made Before a Legal Prenuptial Agreement

Though a prenuptial agreement is not a necessary legal requirement, few people with premarital assets or children from a previous relationship opt for one to prevent the legal and financial uncertainties that death or divorce may bring in the future.

It is key to make it clear who owns your property since the most typical reason for prenuptial agreements is to clarify who owns what before everything is combined. Furthermore, it can be defined how marital property will be distributed in the event of a divorce, making the divorce procedure much easier and less expensive if it occurs.

You want to ensure that your inheritance rights are secure. If you’re married for the second time or have children from a previous relationship, you may want to spell out your inheritance preferences in a contract, including any children born during the marriage.

One may also want to engage with a family law expert to draught a prenuptial agreement that assures your assets go to the children. A prenuptial agreement, in conjunction with a well-drafted will or estate plan, can help you carve out “non-marital property” that is completely yours.

It is key to note that if one of the parties dies before their spouse, these contracts can override state inheritance laws. Otherwise, it would leave those assets to the surviving spouse, ensuring that the children do not have to rely on their step-good parent’s will to get their inheritance.

It is a misnomer and a misperception that only wealthy individuals require prenuptial agreements. While not every couple will benefit from a prenuptial agreement, some will find that it provides them with peace of mind and confidence while making a commitment to one another.

Template: What Is Included in It?

Contrary to popular opinion, in Maryland, you are not allowed to include anything you wish in the contract.

The followings are the important things that are included in the agreement:

In conclusion, a prenuptial agreement’s contents are fact-specific and should be modified to match the future needs of both parties. Many couples engage in premarital mediation, negotiation, or collaboration in order to reach an agreement on provisions that will be included in a prenuptial agreement.

When provided with a prenuptial agreement, you should have it evaluated by an experienced lawyer who can explain your legal rights, as in terms of the laws in the state of Maryland.

Template: What Is Not Included in It?

The items which are not permitted in the state of Maryland, are the followings: 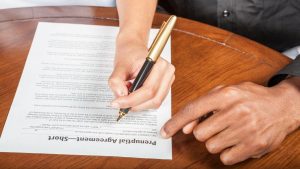 In Maryland, a prenuptial agreement cannot include child custody or child support payments for the parties’ current or future children.

However, for many couples debating whether or not to seek a prenup, family planning remains a driving element.

Note that if the partners plan to have children, they should see an attorney to draught a prenuptial agreement that specifies who will care for the children and considers how the interruption in his or her professional path may affect the homemaker spouse in the event of divorce.

Debt is a common basis for a prenuptial agreement because nobody wants to be in debt for reasons they didn’t cause. By adopting stipulations that segregate each party’s debt, partners leave the marriage in the same financial situation as when they first met.

Children are often excluded from prenuptial agreements, except for children from a previous marriage or relationship. In general, custody, visitation, and child support are problems on which a judge must rule in the best interests of the kid, and children are typically born after marriage. However, if there is no child involved, the best interests of the child cannot be determined.

There are some restrictions:

If a spouse hid assets from his wife before signing the prenuptial agreement, a court could rule it unenforceable for fraud. If the woman was unaware of her husband’s assets at the time she signed the contract, she would be unable to assess what she was giving up and whether the deal was fair.

Couples do not have to share full descriptions and values of every item, but they should be aware of each other’s financial condition in general. However, in order to prove duress or coercion in a prenuptial agreement, the challenging partner must establish that the other spouse threatened to harm or injury if the challenging spouse did not sign. Similarly, for a judge to nullify a marriage agreement, one spouse’s improper influence over the other to force a signature must be excessive.

The enforceability of a prenuptial agreement is generally unaffected by minor errors. If a couple’s intentions can be deduced from the documents and the spouses’ evidence, the court will endeavor to honor them. However, if a judge is unable to correct a severe error, the agreement may be void.

The court may reject the agreement if either spouse was unable to understand it while signing it. If the spouses were mentally defective, suffering from a mental condition, minor or intoxicated at the time they signed the agreement, a judge may find them incompetent.

A prenuptial agreement will only be declared unconscionable by a court if it is so unjust that it is “shocking” to the court. For instance, if one spouse receives millions of dollars while the other spouse is obliged to obtain public assistance or welfare, the court may rule that the agreement is unconscionable.

Preparing a prenuptial agreement with an attorney and having an accountant develop certified personal financial documents for each spouse to disclose and attach to the agreement prior to signing is the “gold standard” for ensuring your agreement is enforceable. 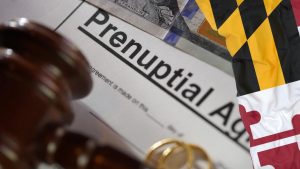 As prenuptial agreements are fact and asset-specific, they differ from case to case. Further, we conclude the following:

We hope all your queries regarding the prenuptial contract might get resolved after reading this article. Then, get your prenup ready as soon as possible.

Is Polygamy Legal in Texas? Texan Law and the Possible Outcomes