Legal separation in Georgia occurs when a couple agrees to live separately and apart without formally ending their marriage through divorce. 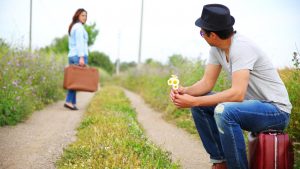 Georgia law does not legally validate “legal separation.” Still, it provides couples with a divorce alternative known as separate maintenance. Similar to traditional divorce, this process allows the couple (or the judge) to decide on various other issues like custody, maintenance, child support, and alimony.

The Georgia separation laws prohibit a judge from dividing or awarding property in a separate maintenance claim, which is a significant difference between traditional divorce and separate maintenance. To put it another way, if you want to split marital assets with your spouse, you must file for divorce.

To be eligible for separate maintenance, you must show all of the following:

You and your partner are legally married, but you do not live together (no cohabitation), and neither of you has filed for divorce.

Legal separation grounds may have arisen after the marriage, Thus, filing for separation in Georgia can be made on the following grounds:

You’re either married or divorced in Georgia. There is no middle ground in Georgia, and there is no such thing as legally separated in Georgia as in other states. If your marriage is failing and you do not want to live with your spouse, you must petition the court for a divorce or a separate maintenance order.

There are various reasons why couples decide not to live together and not divorce in order to continue receiving benefits at a certain level in the form of retirement, pension plans, and even better health insurance benefits. You may be unable to consider divorce due to religious considerations.

Separate Maintenance provides some of the advantages of legal separation in Georgia, but it is still very different. The marriage does not end with a separate maintenance order.

You are not permitted to marry another person, but you may move back in with your spouse if you reach a reconciliation. Further, you will still have to work out issues like property division, alimony, child support, and custody with a separate maintenance order.

Remember that you must file for divorce if you want to end your marriage legally. If you want to secure the validity of marriage but no longer want to live together, you can file for separate maintenance.

How To File for Legal Separation in Georgia

One or both parties must have lived in Georgia for 30 days before filing for separate maintenance.

Hopefully, both parties agree on the legal separation. However, if one of the parties disagrees with the filing, the paperwork must be delivered by a process server.

If both parties are willing to work out all of the issues, as in an uncontested divorce case, the judge will almost certainly sign off on the agreement, as long as it is fair to both parties. If you and your spouse can’t agree, you’ll have to go before a court, which will decide on property, asset split, custody, and visitation.

One thing to keep in mind is that this filing can be just as complicated as divorce. Fees must be paid, paperwork must be filed, and multiple court dates may be required. Your choice of an attorney may be the most beneficial decision you can make. They can assist you in weighing all of your options and determining whether it is worthwhile for you to file for divorce or separate maintenance.

If you and your spouse decide to separate rather than divorce, it’s a good idea to put the terms of your separation in a document called a separation agreement. This document requires both spouses to collaborate in determining how to distribute custody and visitation with minor children, whether either spouse will pay child support (and how much), and whether spousal support is appropriate.

A separation agreement should also specify how both spouses will share bank accounts, marital property (such as a marital home), vehicles, and other assets affecting your family. 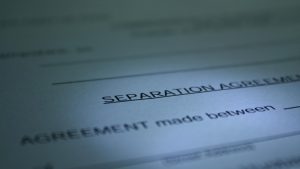 Alimony and property division are handled the same way in a divorce. A legal separation, like a divorce, can be decided by a judge on both issues. Besides this, the court may also make decisions on debts, child custody, child visitation, and child support.

Benefits of Legal Separation in Georgia

Separation or divorce is a highly personal decision that varies from family to family. Some couples have reached a point in their marriage where they are unwilling to divorce. Separate maintenance may be the necessary bridge to avoid a total divorce if reconciliation is a remote possibility.

Other families request separate maintenance because their religion forbids divorce. Even though they are still married, the spouses can be free of traditional marriage roles without going against their deeply held beliefs.

If one spouse becomes ill and receives medical coverage through the other’s employer, traditional divorce will almost certainly result in the termination of health care insurance.

Although 30 days may not seem like a long time to wait for divorce proceedings to begin, some spouses are impatient and choose the separate maintenance route, which the judge can begin within three days of both spouses receiving the paperwork.

The Supreme Court stated in Blasingame v. Blasingame (1982), The term “marital separation” refers to the suspension of marital contact between married couples without the marriage being dissolved. The other partner’s company, cooperation, aid, and intimacy in all conjugal ways are all restricted marital rights. Separation can occur when one partner moves into a different room to limit conjugal rights.”

Temporary support agreements and, in general, the divorce, if a complaint has been made, are jeopardized if “make-up relations” occur. According to Georgia law, voluntary cohabitation nullifies all provisions for a spouse’s permanent alimony.

Cohabitation, on the other hand, has the effect of nullifying only future alimony obligations, and the spouse is not required to return any property or payments already received.”

And the precise date of the separation can be significant. As a result, it is preferable for a divorcing spouse to set a date that can be easily verified. It could be the 1st of January, when one spouse moved out, or the day following a particularly memorable dispute or incident that prompted separate bedrooms.

If a spouse is attempting to reduce historic support, the exact date of separation is critical. To avoid evidence of voluntary payments, the responsible partner will normally try to push back the date of separation as far as feasible. Typically, the spouse receiving support will argue that the alleged “separation” was not legal until later. 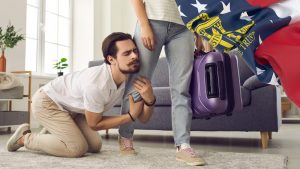 There are factors to determine before getting a separation or divorce in Georgia; thus, you need to hire an expert to do all the things in accordance with the law.

We hope that you now have a better understanding of the laws and processes followed during legal separation in GA.

What Questions are Asked in a Child Support Hearing?