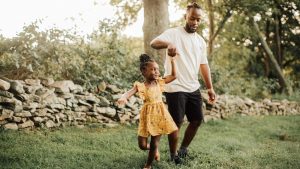 Fathers rights Maryland refer to the entitlements of dads in their children’s lives. When it comes to domestic relations matters like divorce and child custody, fathers have the right to make certain decisions regarding their children. In this post, we discuss the various rights for Maryland fathers and how best they can protect these rights.

What Rights Does a Father Have in Maryland?

Depending on the age and interests of a child, a father may be granted sole or joint custody. Joint custody may further be categorized as joint legal, shared physical, and a combination of the two. Joint legal custody refers to when both parents share the control and care of a child’s upbringing, even if the child has one primary residence.

With shared physical custody, the child can live with any of the parents, spending at least 35 percent of the time at each residence.

Additionally, fathers could be granted sole custody, like sole physical custody, sole legal custody, or both. When parents have more than one child, the father has the right to seek split custody; however, Maryland courts don’t favor split custody.

– Rights for Unmarried Fathers in Maryland

Legally, a child born to unmarried parents in Maryland doesn’t have a father. To change this, the unmarried father has to sign the birth certificate, as well as an Affidavit of Parentage before the child attains the age of majority (18). Establishing paternity is the only way through which unmarried fathers rights Maryland can be enforced.

For unmarried parents, it is vital to establish paternity for the purposes of custody, visitation, and child support. To apply for child custody or visitation rights, an unmarried father in Maryland must be recognized by the court as the legal father of the child.

Besides a court determination of paternity, an unmarried father can also acknowledge paternity in writing or marry the child’s mother and then acknowledge himself as the father orally or in writing.

Maryland custody laws for unmarried parents are the same as those for married parents, provided the father has established paternity. Maryland laws no longer give preference to the mother to be the custodial parent as they are focused on fostering healthy relationships between children and parents.

In most cases, unmarried parents will live apart and separately. As such, each parent must understand their rights regarding the child’s life. While the mother could be the custodial parent, a father can request custody of the child if there are valid reasons. Otherwise, the unmarried father still reserves his visitation rights, provided he establishes paternity.

Besides custody and visitation rights, unmarried fathers who establish paternity can extend some benefits to their children. The legal father can give child support and other benefits, including health and life insurance, inheritance rights, and even veterans’ benefits.

How To Establish Fathers Rights 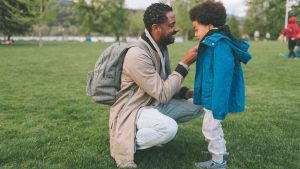 For unmarried couples, the supposed father may miss out on the chance to establish a relationship with his child if paternity isn’t established. Establishing paternity simply refers to the legal process of ascertaining the biological father of a child so that he becomes the legal father of the child.

In Maryland, there are two ways through which unmarried couples can establish paternity. The first and perhaps the most straightforward is signing an Affidavit of Parentage. It is a simple and voluntary process, but any doubts about the child’s paternity should be enough reason not to sign the affidavit. This is because once the affidavit is signed, it becomes legally binding and often difficult to overturn.

Such doubts should be cleared through a DNA test as this method helps ascertain a child’s biological father. In many cases, unmarried couples have the chance to sign the Affidavit of Paternity while at the birthing center or hospital with a witness present.

– After Signing the Affidavit of Paternity

What happens following the act of signing the Affidavit of Paternity is that the hospital or birthing center staff ensure that it is filed with the Office of Vital Statistics. By signing this document, the named father becomes the acknowledged legal and biological father of the child.

Besides signing the Affidavit of Paternity, unmarried fathers can also go to court to establish paternity. One of the parents or a representative of the Child Support Enforcement Agency (CSEA) takes paternity action to a Maryland court. The CSEA could be a party of interest if the mother or child is receiving financial support from the father.

Whenever parents are going through a divorce or legal separation, the non-custodial parent is accorded visitation rights. Such rights are intended to maintain a healthy child-parent relationship. Parents may agree to come up with a parental visitation time plan that would be in line with their schedules.

If the mother is the custodial parent, the father is entitled to “reasonable visitation.” This means that the courts leave it to the parents to come up with suitable times and duration of visitation. Both the mother and father should act in good faith and agree on reasonable visitation since it is in the best interest of a child to have a working relationship with both parents.

However, if parents can’t agree, a judge will give an order and enforce fathers visitation rights in Maryland. In such situations, a judge places the father on a “fixed visitation” schedule – definite times (and sometimes places) where the father is to have visitation. While fixed visitations may not be the most preferred by Maryland courts, they tend to provide some stability and certainty that is desirable for children.

Maryland law doesn’t favor the mother or father as it presumes that both parents are the inherent custodians of their child. In case of separation, either parent can request custody of a child in a circuit court. If there is no agreement between the parents, a court will grant either sole or joint custody in line with the “Best Interest of the Child Standard.”

Under this standard, the court considers various factors to establish what is best for the child. In Maryland, court-ordered child custody has two components: legal and physical.

Role of a Dad in a Child’s Life

The long-standing presumption that the mother is the best-suited parent to have custody of a child after divorce has over the years undermined fathers’ rights. Maryland laws state that both parents have the right to a healthy and working relationship with their children.

Traditionally, mothers have been considered the most competent parent and the primary caregivers of their children whenever custody issues arise. While this notion holds water, the role of a father in a child’s life cannot be overlooked. Fathers are also capable caregivers to children and also play an additional role in disciplining their children.

It has also been shown through studies that children brought up by loving and caring fathers tend to have better social and life skills as well as perform better academically. It is important that fathers assert and protect their parental rights to maintain the healthy, well-rounded relationships their children deserve. 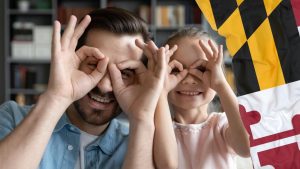 While it is presumed that the mother should always be the custodial parent, Maryland laws grant fathers equal custody and visitation rights. Here’s what you should know about fathers’ rights in Maryland:

Maryland laws protect fathers’ custody and visitation rights as they don’t consider the mother to be the best suited custodial parent. If parents are unmarried, the father must establish paternity before seeking custody or visitation time.

When Does Divorce Regret Set In? Time and the Healing Process

Common Law Marriage Alabama: Is It Valid in the State?