If you were considering getting married lately but can’t afford traditional ceremonies in Ohio, you must remember that common law marriage in Ohio is not an option.

Unfortunately, the state of Ohio only recognized common-law unions until October 1991, and at that time, courts had specific requirements.

This article will discuss in-depth marriage laws in Ohio, common-law marriage in the state, the divorce process, and other valuable information.

Before we dive into our main topic, let’s quickly explain the concept of a common law marital relationship.

Being married by common-law does not mean that you have to go through a formal wedding ceremony or receive a marriage license. However, a valid common-law marriage usually confers the advantages and obligations of a legal marriage.

Most states set standard requirements for common-law marriages, which are:

Some states process common-law marriage through their statutes, while others through court decisions. The nine states that still offer common-law marriages are the following: Iowa, Colorado, Montana, Kansas, Oklahoma, Texas, Rhode Island, and the District of Columbia. 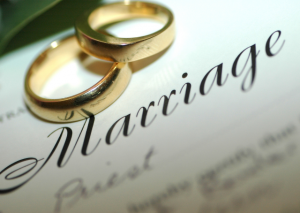 Ohio is one of the states that does not recognize common-law marriage. Unlike a few other states, Ohio does not allow you to receive marital rights and responsibilities by simply living together with your partner for a specific period. According to Ohio laws, any common-law marriage entered after October 10, 1991, is considered illegal and unacceptable.

Subsequently, to end a common-law marriage in Ohio, the couple must take legal actions in conformity with the ceremonial and licensing regulations of the other states (i.e., the state where you got married by common law).

Therefore, the Ohio common-law marriage only exists if you got married by common law in another state or if you established your union before October 10, 1991.

What if You Decide To Move to Ohio?

Let’s suppose that you decided to move and settle in Ohio after living in one of the states mentioned above or Pennsylvania. You and your spouse were married by common-law and seek validation in Ohio to preserve your rights. Thus, you should consult a family law attorney to receive validation for your marriage according to the marriage laws in Ohio.

Keep in mind that you can get married by common-law even if you don’t have the right or ability to get married to anyone while living with your other half.

Two cases of which could be:

Initially, you could not marry as soon as you moved in with your partner; however, following either a divorce or death of a spouse, you gain that capacity back. As soon as your common-law marriage is established, it is just as legal and irrevocable as any other valid marriage.

Your common-law marriage lasts until one partner dies or you are granted a divorce. You will have to prove your marriage in the case where your spouse dies before you both lawfully establish a common-law marriage, to be able to inherit, earn insurance benefits, and obtain pension and Social Security Survivor’s benefits.

The most solid evidence partners can show to prove their intention of marriage is a written agreement between them. However, only a judge can confirm whether a common-law marriage exists.

Several factors that the court usually looks into and takes into consideration before determining whether or not you are in a common marriage are the following:

For example, this usually happens when a spouse tries to inherit properties under intestate succession laws. In such cases, the court rules following the law that provides a share of the property to the spouse; nonetheless, it may not acknowledge an unmarried partner.

In that case, the effectiveness and legitimacy of the marriage will depend on how you and your partner view your relationship and how you act accordingly. Thus, an imperative element that helps determine the presence of a common-law marriage is the couple’s intent to do so. 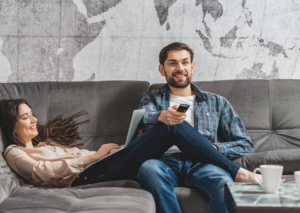 Although each government applies its requirements for registering a domestic partnership, here are the general conditions to keep in mind:

To further clarify, the state of Ohio does not grant any legal status to couples who are living together. According to cohabitation laws in Ohio, you have to establish a cohabitation agreement with your partner to define your rights and responsibilities as a couple.

Some of the elements of such an agreement include the following:

Establishing a cohabitation agreement with your partner is highly important to secure your rights in case of a split. Unfortunately, there are no laws in Ohio that protect unmarried and cohabitating couples.

Thus, a breakup may become stressful, frustrating, and confusing. Like prenuptial agreements before marriage, a cohabitation agreement protects both parties, rights, and properties. Keep in mind that establishing such an agreement requires the help of an experienced counsel or attorney.

Every divorce case includes alimony; however, in live-in relationships, it’s not an option. Instead, there is something called “palimony,” and it’s the division of real property and assets after separation from living together for several years.

Unfortunately, palimony in Ohio is not recognized, and it’s not guaranteed to unmarried couples. The Ohio state considers that living together and being in a romantic relationship is not enough. Therefore, it is essential to establish a cohabitation agreement to preserve all your rights.

Marriage is a legal and spiritual relationship between two people. When you declare your vows, you enter a legal marriage contract. The contract doesn’t include only you and your spouse but also the state of Ohio because you have to commit to specific responsibilities and obligations under its laws.

– How To Get a Marriage License in Ohio?

The only agency allowed to issue a marriage license in the probate court in 88 counties across Ohio. Both parties must appear in the probate court in person and declare under oath their age, name, place of birth, residence, Social Security number, occupation, mother’s maiden name, father’s maiden name (if applicable), and the person who will solemnize their union (if applicable).

You might also need to provide a birth certificate and an ID photo to prove the facts. If you or your future partner have been married before, you must provide the names of your ex-partners and minor children (if applicable).

If one of you went through a divorce, you must provide the exact date and place of the divorce, as well as the number of divorce cases and a certified copy of the divorce decree. Keep in mind that the probate court in each county will charge a specific fee for the marriage license; thus, make sure to check before applying.

Marriage does not give a wife or husband an ownership interest in assets that they owned before getting married, nor it creates an obligation for the premarital debts. Assets that you acquire after your marriage may be registered under both of your names or separately.

However, if one spouse dies, the surviving spouse has several rights regardless if the deceased spouse had a will or not, including the following:

In addition, in case of a divorce, the court will decide how to divide assets between both parties fairly.

– Why Is Record-Keeping Important During Marriage?

There is no better time to start record-keeping than now. This is important since you will never know when a small bill will save your rights during a divorce case. Thus, get yourself a safe box to keep all your valuable documents (i.e., marriage certificates, religious certificates, birth certificates, contracts, deeds, insurance policies, different bills, etc.).

Record keeping will assist in proving premarital ownership of an asset. To clarify, you will have to prove to the court that you owned the asset before marriage, and the evidence is in your record-keeping safe box. The court will need to trace all the evidence from the duration of the marriage to the time of the divorce case.

What Do You Need To Know About Divorce in Ohio?

As you already know, a divorce is a civil lawsuit to end a marriage where parties ask the judge to make a final decision regarding children, spousal support, and property division.

The “plaintiff” is the spouse who files for divorce with a court clerk, and the “defendant” is the one who receives a copy of the divorce claim and a summons. When filing for a divorce, the “plaintiff” must claim and prove the statutory grounds for divorce.

In most cases, couples can resolve a divorce case through an agreement where a proposed divorce decree is established. Both parties will have to sign the divorce decree before submitting it to the court. The judge will approve the agreement after a short hearing and make it a court order.

If the parties cannot resolve their divorce issues through an agreement, they must present relevant evidence during a contested trial. The court will then review all the evidence and make a decision based on divorce laws in Ohio.

Can CPS Reopen a Closed Case? Possible Courses of Action

How To Get Full Custody After Joint Custody: The Complete Process

How To Beat CPS in Texas: Everything You Need To Know