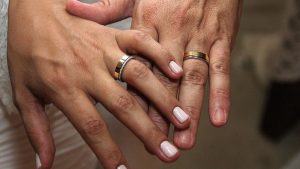 Common law marriage in Maryland was abolished many years back, and the state doesn’t recognize this form of marriage.

The term ‘common law’ means that no official documents or proceedings are required to give the relationship legal status.

In states that recognize it, common law couples have the same responsibilities and protections as legally married couples do. In this article, we discuss the various aspects of common law marriage, including the alternatives of this form of marriage in Maryland.

No, common law marriage isn’t recognized by the state. As such, you and your partner can’t be considered to be in a common law marriage even after living together for seven years as most people presume. As such, partners who cohabitate without getting married may not have the same marital rights and obligations as those who are legally married.

In such cases, common law spouses will need legal action to dissolve or terminate their common law marriage established in other states or countries in line with their ceremonial and licensing regulations. Courts can determine the spouses’ marital rights and responsibilities based on common law in Maryland.

In Maryland, a domestic partnership refers to a relationship between two parties of the opposite or same sex who agree to live together and maintain a relationship of mutual interdependence. This means that each party contributes to the support and maintenance of the relationship and the other party.

In 2008, Maryland passed a law to make domestic partnerships available to people as an alternative to traditional marriage.

To be in a domestic partnership, parties must:

To enter into a domestic partnership, parties are required to provide two pieces of documentation to prove their bond.

These documents may include any of the following:

Domestic partnerships are particularly important to parties who wish to remain unmarried because they allow for such people to share finances as well as raise children as unmarried parents. Most importantly, it allows unmarried parties to claim property and benefits like tax exemptions on any inherited real property upon the death of the other party.

Proving that you are in a domestic partnership, you need an Affidavit, which is a sworn statement signed by you and your partner before the death of either partner. Maryland laws provide that this Affidavit be “signed under penalty of perjury by the two parties stating that they have entered into a domestic partnership.”

If possible, you should consult with an attorney for any matters that pertain to estate planning. It is also important that you keep the Affidavit of Domestic Partnership safe, with two forms of proof as indicated above as these will help prove the legality of your domestic partnership. 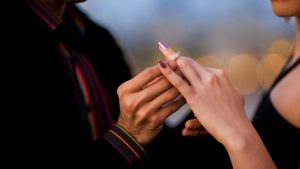 Another alternative to a common law marriage in MD is creating a cohabitation agreement.

This is a document that helps safeguard the personal interests of a cohabitant, as well as the rights of the unmarried partners.

Given that couples who choose to live together without getting married may at one point decide to part ways, it is sensible to agree on how to deal with certain issues beforehand.

Valid cohabitation agreements are like any other valid contracts. They are more like prenuptial agreements as they cover the following subject matters:

In addition to cohabitation agreements, unmarried spouses may establish wills and durable powers of attorney to ensure that their estate is distributed accordingly and that their wishes are executed when they die or become incapacitated.

Below, we provide answers to some common questions regarding common law marriage in Maryland.

– How is Common Law Marriage Terminated in Maryland?

Common law marriage can be terminated if spouses agree that they no longer want to be in a common-law marriage established in another state or country. There are options to terminate their relationship.

As of today, Maryland has no provision for divorce between two people who are living together but not legally married. However, if it is proven that their common law marriage was valid in that state or country, they will have to go through the normal legal process of divorce to terminate their marriage.

It is more difficult if one party wants out of the relationship while the other does not. A common law marriage can only be terminated by rendering its invalidity through an action in court; either by showing that it did not exist at all or that it has been legally terminated. If the common law marriage is invalidated then parties are no longer married, just as in a traditional divorce case.

If the court finds that the common law marriage was legal and still in existence, it can order its termination if certain events have occurred which correspond to those typically needed to show that a common law relationship is over. For example, if one party goes into hiding so they cannot be contacted by their partner when they want to terminate the arrangement.

– Can Alimony Be Awarded in a Maryland Common Law Marriage?

Also, the Maryland law does not specify whether a court in the state can enforce a palimony order issued in another state that recognizes common law marriage. If you and your common-law spouse are now living in Maryland and are looking to end your relationship, you should speak to a family law attorney to find out your rights and entitlements.

– What are the Disadvantages of Common Law Marriage Compared to Traditional Marriage?

A major disadvantage is that it is difficult to prove a common law marriage if, for example, a conflict over an inheritance arises because there are no official court records that exist. Disputes over this type of situation can often lead to courtroom battles. On the other hand, traditional marriages have legal documents such as birth certificates and licenses that can be used to prove their existence in most courts across the country.

Another disadvantage of common-law marriages is that the partners lack legal obligations such as alimony and equitable distribution of property in the event of a divorce. 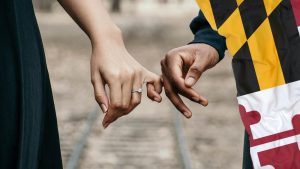 Unlike traditional marriage, common law marriage involves couples who live together in a marriage-like relationship which is not legalized through a license or ceremony.

Below is a summary of our discussion regarding Maryland common law marriage:

While you can’t get into a common law marriage in Maryland, your partner can explore alternatives, including entering into a domestic partnership or creating a cohabitation agreement with your partner. This way, you and your partner get similar rights and obligations as spouses in legal marriages.

Child Custody When One Parent is in Jail?

How Much is a Divorce in Louisiana? Getting Through Divorce