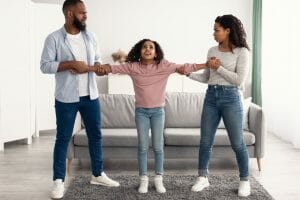 The question “At what age can a child decide which parent to live with in Texas?” has often crossed the minds of most parents who are contemplating divorce.

When you and your soon-to-be ex-partner are heading into a child custody battle, there are various things to consider, including whether a judge will consider your child’s preference.

In Texas, the law doesn’t explicitly allow a child of a particular age to decide the parent to live with — courts allow children to express their preferences instead, which may help in the final decision. In this article, we’ll look at children’s preferences regarding their residency and how courts handle such matters.

What Age Can Your Child Decide Who To Live With in Texas?

Your child can decide who to live with in Texas when they turn 18 years of age. This is according to Texas family laws, and for minors, the decision of who to live with or whether to allow visitation (access time) rests entirely with the parents or the court.

Questions often arise as to whether 16 or 17-year-olds can choose the parent to live with in Texas. While such children are still considered minors, an exception to the rule that one must be at least 18 years old exists.

A child can be exempted from this rule through emancipation, formally referred to as “removal of disabilities of minority” in Texas. When emancipated, a minor will have the same rights as an 18-year-old. An emancipated 17-year-old can decide which parent to live with even before turning 18.

According to Texas family laws, a court can only grant emancipation to a minor if they are:

There’s a common presumption among Texas parents that a child can choose which one between his parents to live with once they reach the age of 12. However, this is far from true according to the provisions of Texas family law.

The rule that minors can’t decide which parent to live with in Texas applies to all ages below 18. As such, a 13-year-old in Texas has no power to decide where to live – only the parents or court can decide.

Divorce and custody laws differ from state to state. In New Mexico, children may assert their preference from the age of 14. Their input may be weightier at this age, and a judge will hardly go against the child’s desires unless it is proven that doing so is in the child’s best interest. New Mexico law provides that the court shall consider the desires of a minor who is 14 years in age or older as to whom they wish to live with before entering the final custody order.

– The Law and a Child’s Decision in a Custody Case

According to Texas Family Code 153.009, parents can request the presiding judge to speak to their child. If the child is 12 years in age or older, the judge must meet them. Otherwise, the judge isn’t required to meet with the child.

In addition to addressing where the child will live, the law also touches on visitation and other issues in which a child may have a preference or opinion. The law allows a child to meet the presiding judge and voice their opinion on important matters (if the judge is open to hearing the evidence).

Parents must understand that an interview between their child and the judge may be granted and that it serves as evidence that might be used by the court to decide a custody case. However, the law doesn’t oblige the judge to follow the child’s wishes — they retain the power to decide custody, possession, and access.

– Child Runs Away to the Non-Custodial Parent

Probably the most challenging situation for a parent is when a child runs off to a non-custodial parent after a divorce is finalized. Such situations can be problematic for both parents, but they should remember that they are obligated to abide by a custody order once the court issues it.

When a child runs away to the parent without custody, both parents are still required to abide by the custody order. As such, the parents should report the incident to the authorities. Until a legal modification of the custody order is done, the child should continue to live with the custodial parent, often referred to as the managing conservator.

When resolving this issue, parents must understand why their child left the custodial parent’s home. Some of the reasons include the following:

If you’re a non-custodial parent and suspect that the child could be subject to abuse, you must report it to the authorities.

– Child Chooses Not to Visit a Parent in Texas

When a judge finalizes a Texas divorce, they enter a custody order specifying the child’s legal and physical custody. Additionally, a custody order sets a visitation schedule that specifies when each parent picks up or drops off their child. The terms of the custody order are legally binding on both parents.

Just as children can’t decide which one between both parents to live with in Texas, they have no right to refuse visitations with a non-custodial parent. The custodial parent is obligated to force visits if the child decides not to go, even if it might seem unethical. According to the law, each parent has to follow the custody order to the letter.

The custodial parent should make the child available for visits with the other parent as stipulated in the custody order. While parents are required to stay in control of visitations, it is understandable that it may be difficult to deal with teenage children.

In some limited situations, allowing visits may be unethical if you suspect the other parent is abusing or harming the child. If you have reason to believe the child is being abused, you should immediately seek court intervention in addition to preventing visits.

– Choosing To Live With a Parent During Divorce

A more frequently asked question is whether a child can decide the parent to live during a divorce process with as per Texas custody laws. While the answer to this might be confusing, the statute under Section 153.009 of the Texas Family Code makes it clear that a child 12 years or older can have their say in which one between both parents they would like to live with during the divorce process, but a judge will ultimately have the final decision.

Before a law change, a child aged 12 or above could express their preference by filing with the court the name of the parent they want to live with during the divorce proceedings. While this would be subject to the court’s approval, it didn’t mean the child could decide which parent to live with.

It was a way for the child to state their preference; from there, the court would be the final decision maker. It was a “resource” or “evidence” to be considered alongside other evidence in a case.

– Child Wants to Live With a Non-Custodial Parent in Texas

While a child may not have the right to choose the parent to live with in Texas, they may be insistent on living with the non-custodial parent. Usually, this may present difficulties in parenting for both parents.

How the parents handle this matter will depend on whether or not there is a custody order. If there is none, the non-custodial parent can live with the child without involving the court. In the case of a custody order, the parent without custody will have to file a motion in court to change custody, access, possession, and child support.

When evaluating a motion to modify the custody order, a court considers the child’s best interests based on the factors mentioned above. The judge may also need to meet the child if they are at least 12 years old to determine their preference.

– Factors To Determine a Child’s Residence

In Texas, a child’s preference or wish can’t be the sole determinant of where they live. If they are 12 years or older, they can present their wishes to a court through a motion. However, what does the court consider deciding a child’s residence in a custody case? Here are some of those factors:

Divorcing couples often wonder whether or not their child is capable of choosing which parent they would want to live with after a divorce, and these couples have to decide who gets custody of the child. In the state of Texas, a child can’t conclusively decide which parent they get to live with until they are 18 years old, and this article has highlighted various issues regarding children’s wishes and preferences in custody cases.

If you and your partner are contemplating divorce and have children together, you should consider working with an experienced divorce attorney or a renowned law firm to ensure that your rights and those of your children are protected. Most importantly, you can resolve child custody issues more amicably.

If CPS Takes Your Child Can You Have Another Baby?

How to Prove Alcoholism in Custody Cases: A List of Methods